All the latest honors and reviews, as well as upcoming events and publications at MTM Publishing. 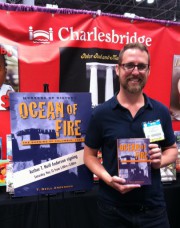 Hundreds of people eagerly gathered around the Charlesbridge Publishing booth at Bookcon on May 28, 2014 for a chance to receive the signature from Ocean of Fire author, T. Neill Anderson. In only a half hour, the 150 copies of Anderson's book were gone and into the hands of excited readers.

From the Horrors of History series, City of the Dead was chosen by the Junior Library Guild as its 2013 selection. It also received the citation as a 2014 National Council for the Social Studies / Children's Book Council (NCSS/CBC) Trade Book for Young People. The book, written by T. Neill Anderson and developed by VP of Editorial Development, Hilary Poole, has received great reviews. Here are just a few:

From the March/April 2014 issue of the Library Media Collection: "In this fictionalized account, Anderson skillfully relates the story of that terrifying September day through the eyes of a number of individuals . . . Through the use of short sections that alternate among the central characters, Anderson maintains suspense and the readers' interest. Photographs, paintings and maps help supply context to the well-researched narrative and partially convey the extent of the damage. This book is an excellent way to provide young readers perspective on more recent natural disasters and to demonstrate that, despite human loss, life continue from the communities that suffer these calamities."

From the August 2013 issue of the School Library Journal: "Anderson does an excellent job of telling the story and weaving actual events into his fictionalized account. Readers will understand the epic nature of this storm and feel genuine pathos for these people and what they went through. . . This is a highly accessible entry point for kids trying to understand and put meaning to some of the recent natural disasters that have struck our country as well as a vivid account of one of our nation's worst."

Library Journal selected the Encyclopedia of U.S. Political History (CQ Press, 2010) for its Best Reference 2010 list, which they announced in their 4/15/2011 issue. LJ's starred review from 5/15/2010 called the encyclopedia "an impressive work remarkable for its breadth and scope" and the review praises the "vivid and accessible, yet scholarly" style and the "wonderful synthesis of history and politics."

The 6-volume reference work Encyclopedia of Journalimsm, managed and edited by MTM Publishing, for Sage Reference was honored at the January 2010 American Library Association convention with an honorable mention for the Dartmouth Medal, which "honors the creation of a reference work of outstanding quality and significance."

Critical Honors for Political Encyclopedia of U.S. State and Regions

MTM earns NY Public Library Best of Reference resource of 2010 citation and industry commendations for its Political Encyclopedia of U.S. States and Regions (CQ Press, 2009). Excerpts from the Library Journal and Choice reviews are included below:

"If you find yourself constantly wading through various reference books to locate in-depth data on state government, then look no further than this comprehensive set." --Library Journal

"This resource is well composed and provides a trustworthy overview of state political issues. . . . Summing Up: Recommended. Lower-level undergraduates and above; general readers." --Choice

MTM's Food and Nutrition (Marshall Cavendish, 2009) was cited on Booklist's Best Bets for Student Researchers 2009 list. In its May 15, 2009, review, Booklist said, "This would be an excellent source for students . . . . Highly recommended for school and public libraries."

The event will take place at In Good Company, 16 West 23rd Street, on the 4th floor, from 12:30 to 2:00 p.m. The panel is free for members of the ABPA and $20 for nonmembers to attend. Please email office@abpaonline.org to arrange payment by PayPal or pay at the event.

Visit the ABPA website for more information about the event.

MTM Publishing Moves Into Middle Grade and YA Fiction

After many successful projects in nonfiction and reference for the middle grade and YA market, MTM Publishing has branched out into fiction for these ages groups.

MTM's VP of Editorial Development, Hilary Poole, is guiding the company's expansion into juvenile fiction. Hilary, a novelist herself, is excited by the challenges this new direction offers and sees great potential for MTM, given its native creative talent and market savvy. She aims to launch at least one series per year and is actively looking for publishing partners.

The Horrors of History series now has two novels in the collection, both written by author T. Neill Anderson. City of the Dead focuses on the Galveston Hurricane of 1900, one of the worst natural disasters in U.S. history. The second book, Ocean of Fire, focuses on Sherman's march during the Civil War and the burning of Columbia, South Carolina.