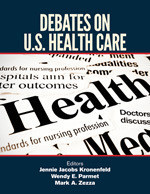 This issues-based reference work (available in both print and electronic formats) shines a spotlight on health care policy and practice in the United States. Impassioned debates about the best solutions to health care in America have perennially erupted among politicians, scholars of public policy, medical professionals, and the general public. The fight over the Health Care Reform Act of 2010 brought to light a multitude of fears, challenges, obstacles, and passions that often had the effect of complicating rather than clarifying the debate. The discourse has never been more heated. The complex issues that animate the health care debate have forced the American public to grapple with the exigencies of the present system with regard to economic, fiscal, and monetary policy, especially as they relate to philosophical, often ideologically driven approaches to the problem. Americans have also had to examine their ideas about the relationship of the individual to and interaction with the state and the varied social and cultural beliefs about what an American solution to the problem of health care looks like. In light of the need to keep students, researchers, and other interested readers informed and up-to-date on the issues surrounding health care in the U.S., this volume uses introductory essays followed by point/counterpoint articles to explore prominent and perennially important debates, providing readers with views on multiple sides of this complex issue.

"It focuses less on policy, which may become dated, and more on the philosophies behind the health care debate. It would be an excellent addition to any library serving an undergraduate population." - CHOICE

"Will be of interest to public, special, and academic libraries interested in health care reform, including those with a focus on medical economics, ethics, and social services." - Laurie Selwyn, Library Journal

Visit the publisher's website for more information and to purchase.