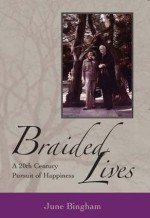 A candid and engaging memoir by June Rossbach Bingham Birge, who's life as a writer, wife, and mother narrates the changing place of women in society, a political story told personally, with great empathy and feeling through her own experiences and evovling attitudes.

What's more, as the wife of U.S. Representative Jonathan Bingham, who served the Bronx in Washington for six terms, the author was brought close to many of the political giants of New York City and New York State. June's chronicling of her travels on the campaign trail and across the world with Bingham as he served in several administrations in various capacities offers a detailed political history of the latter half of the 20th century.

For more information or to purchase, please visit the distributor’s site.