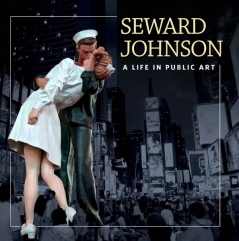 Seward Johnson: A Life in Public Art is a comprehensive look at sculpture artist Seward Johnson's history and artwork. Paula Stoeke, director and curator of the Sculpture Foundation, provides a preface, while Anita Huslin, journalist and author, introduces the book. Broken into sections, the book examines the different aspect's of Johnson's work. Interspersed throughout are closer examinations of individual works, written by various others who are knowledgable on the subjects. Seward Johnson himself, interviewed by Barry Raine, sheds insight and light upon his own work and journey as the reader continues through the book.

Coupled with the beautiful and striking images of Johnson's sculptures, the book is the perfect companion for any admirer of sculpture and art.

From the Seward Johnson: The Retrospective website: "Following an early career as a painter, Seward Johnson turned his talents to the medium of sculpture. Since then, more than 450 of Johnson's life-size cast bronze figures have been featured in private collections and museums in the United States, Canada, Europe and Asia, as well as prominent places in the public realm such as Rockefeller Center, Pacific Place, Hong Kong, Les Halles in Paris, and Via Condotti in Rome. Seward Johnson initially became widely known for his sculptures depicting people engaged in every day activities. The artist continues to add to this series. Johnson’s desire to highlight the mundane in his Celebrating the Familiar sculpture series has brought a unique voice to the world of art in public spaces."