middle school and up

The Horrors of History series combines thorough research, first-hand accounts, and fictionalized characters and scenes to make history accessible to young readers. The results are gripping tales of devastation and bravery, made all the more intriguing by their foundation in real-life events. 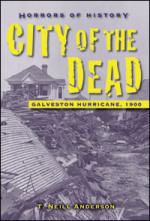 City of the Dead

The year was 1900--a time before cars, evacuation routes, and up-to-the-minute weather reports. It was the day the deadliest storm in US history hammered Galveston, Texas. It was the day an entire island city was nearly wiped from existence.

At the onset of the hurricane, Albert Campbell and the other boys at the orphanage kicked and splashed in the emerging puddles. Daisy Thorne read letters from her fiancé, and Sam Young wondered if his telegram had reached the mainland, warning his family of the weather.

Just a few hours later, torrential rains and crushing tidal waves had flooded the metropolis. Winds upwards of one hundred miles per hour swept entire houses and trees down the streets. Debris slashed through the air; bodies whirled amid the rushing waters. Albert, Daisy, and Sam weren’t safe. No one was.

Based on an historic natural disaster, City of the Dead weaves together a shocking story where some miraculously survive . . . and many others are tragically lost.

Citations and Reviews for City of the Dead

From the March/April issue of the Library Media Collection:

"In this fictionalized account, Anderson skillfully relates the story of that terrifying September day through the eyes of a number of individuals . . . Through the use of short sections that alternate among the central characters, Anderson maintains suspense and the readers' interest. Photographs, paintings and maps help supply context to the well-researched narrative and partially convey the extent of the damage. This book is an excellent way to provide young readers perspective on more recent natural disasters and to demonstrate that, despite human loss, life continues from the communities that suffer these calamities."

"City of the Dead by T. Neill Anderson is a highly worthwhile read in historical fiction for children based on the devastating hurricane that struck Galveston in 1900."

From the August 2013 issue of the School Library Journal:

"Anderson does an excellent job of telling the story and weaving actual events into his fictionalized account. Readers will understand the epic nature of this storm and feel genuine pathos for these people and what they went through. . . This is a highly accessible entry point for kids trying to understand and put meaning to some of the recent natural disasters that have struck our country as well as a vivid account of one of our nation's worst."

"A quick-paced novel about one of the worst disasters in American history. . . Not for the fainthearted but likely to appeal to disaster fans."

"City of the Dead is gripping historical fiction that strays very little from historial accounts of the Galveston Hurricane of 1900. In ten chapters, T. Neill Anderson chronicles the unnamed hurricane from the dawn of its approach to the dawn of its passing." 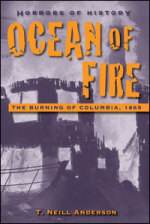 It’s February 1865 and the end of the American Civil War is in sight. Union troops under the leadership of General Sherman have made their way from Atlanta to Savannah, burning Confederate towns along their path, and word is they’re headed to Columbia, South Carolina, to do the same.

Readers follow the stories of several characters—both real and imagined—as they learn about the chaotic community of Columbia as it tries to survive a blazing firestorm. Combining fictionalized narrative with actual documented accounts, readers see this controversial event through the eyes of seventeen-year-old Emma LeConte who struggles to keep her family safe after her father and uncle leave to transport war supplies away from the dying city. Then there’s Charles Davis, a mysterious Confederate soldier who warns the LeConte’s of impending doom. But is Charles really the Confederate spy he claims to be? Can he be trusted?

Each character’s different point of view allows readers to think critically and question who actually started this violent fire while exploring how the closing weeks of the war affected citizens and slaves alike.

Citations and Reviews for Ocean of Fire

"In T. Neill Anderson’s second book of his Horrors of History series, the sequence of events is laid out in a story-like fashion. By using information from diaries and letters by people like Emma LeConte and the Reverend Porter, he creates a sense of intimacy that makes these events all the more terrible. In the Author’s Note and Epilogue, he explains the difficulty in searching through materials to uncover the truth of what happened on that fateful day.  There is also some fascinating information about the amazing lives of the survivors after the war. . . Anderson has captured the horror, the confusion and the inhumanity of an extraordinary event in American history.  He has filled the book with excellent maps and photographs.  This is an insightful glimpse into a page from the American Civil War that will be both entertaining and informative for young adult readers."

"Based on the actual fire that swept through Columbia, South Carolina, after the city surrendered to General Sherman’s Union troops, Ocean of Fire details life in the South at the end of the American Civil War. Supported by thorough research, narrative accounts of actual historical persons as well as fictionalized characters comprise the novel. Follow 17-year-old Emma, her family, and potential Confederate spy, Charles Davis, as a chaotic community tries to survive a blazing firestorm. The second book in the Horrors of History series, Ocean of Fire makes history accessible, questioning who could have started this controversial fire and exploring how the closing weeks of the war affected citizens and slaves alike."

"Older readers, age 10 and up will find Ocean of Fire: The Burning of Columbia, 1865 by T. Neill Anderson an insight into the Civil War as the author tells of Sherman's march on Atlanta that included the destruction of southern cities like Columbia in South Carolina. The story is told through several characters, both real and imagined. This is historical fiction that makes such events come alive for younger readers." 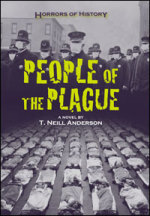 People of the Plague

In 1918 a virulent strain of influenza effected the entire world. In Philadelphia alone it was estimated that 19,000 people died. In this historical novel, young readers follow the experiences of a few fictional characters living in South Philadelphia, the hardest hit section of the city due to its already unsanitary conditions in the tenement housing. Experience the terror, sorrow, and bravery of the city's residents.

Harriet and Harry are excited to be going to the Liberty Parade, rallying patriotism for the American troops heading to the war in Europe. Their friend Barium has just lost his mother to the flu.

Soon, the entire city is felled by this plague. Thomas Ryan and his friends from seminary school help bury the dead-everyday hundreds more pour into the cemetery. And Sister Katherine works tirelessly to help the sick and dying. But adding to the tragedy of the epidemic is the corruption hanging over the city's government and an exhausted doctor tasked with maintaining the city's health code-woefully neglected.

People of the Plague is the third book in the historical fiction series, Horrors of History. The series commemorates horrific, life-changing events in our nation's past. Each novel makes history accessible with a combination of thorough research, descriptions of a specific time period, narrative accounts of actual historical persons, and fictionalized characters. 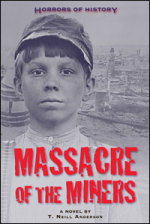 Massacre of the Miners

In 1914, coal miners of the Colorado Fuel & Iron Company went on strike following the company's refusal to grant their requests for fair wages and better working conditions. After a seven month period peppered with violence in the strikers' tent colony in Ludlow, Greek Easter arrived and brought some celebration to the colony. But with Colorado National Guard militiamen lurking on the edges of the tent camp, a strong sense of dread was in the air.

Something horrific was coming.

By noon on April 20, 1914 gunfire rained down on Ludlow sending men, women, and children to run for their lives or cower in crude dirt cellars below their tents. Eleven-year-old Frank Snyder, his father, mother, and four siblings were among these Ludlow colonists. As daylight broke the next day, the tent camp was nothing more than a smoldering pile of debris mixed with bodies of the victims.

This fourth installment in the Horrors of History series weaves real details from the Ludlow Massacre with compelling fictional dialog to tell the story of our nation's most violent labor struggle. An example of the struggle that workers could face when confronting big business, this massacre and the ongoing violence that followed was a wake-up call that led to the rethinking of labor relations in our nation.

Citations and Reviews for Massacre of the Miners

From the April 2015 issue of Booklist:

Events of the day move along in fairly short snippets, fol­ lowing particular individuals or families. It's almost as if readers are watching movie shorts yet are conscious of all the action. This fic­ tional account of an actual event is written in a gripping narrative style and accompanied by archival black-and-white photographs. The epilogue and author's note give facts, figures, and sources for this intriguing tide in the